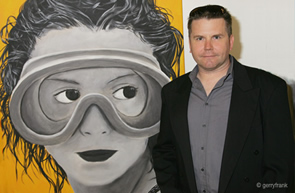 Robert Krutisch was born in Klosterneuburg, a small town in the North of Vienna (Austria) on December 30th 1968.
His career as an artist started while studying at the University of New Orleans (USA). His friend and patron from New York, the artist Hiram Dominguez Jr. (Soho, NYC) taught him the basics for his first larger works.

Over the years Krutisch developed his own characteristic style: fragmentation is a typical feature of his paintings. By intentionally cutting off the edges of his sujets, he moves them closer to the beholder.

Strongly influenced by advertising photography of the 90ies Krutisch soon dedicated himself to create icons of pop culture. The artist often uses screenshots from Hollywood motion pictures or comics.

Krutischs large size paintings are meant to be representative design, eyecatcher and homage to pop culture. His main intention is to illuminate living space with art.

His figurative expression fascinates by intensity and clarity. Andy Warhols und Tom Wesselmans art has a great influence on his work. "The beholder is supposed to feel rewarded", Krutisch says.

Since 1993 supporting member of the Guggenheim Foundation.